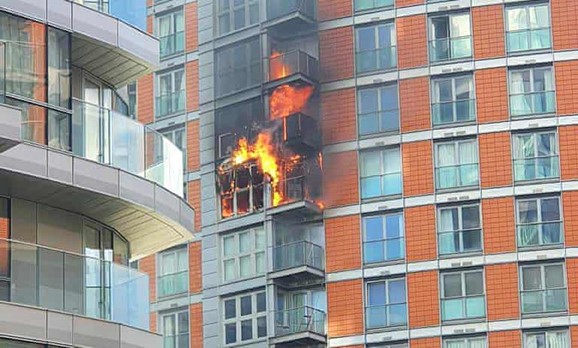 Fire at the tower block in New Providence Wharf in London.

Residents of a high-rise block with Grenfell-style cladding in East London that caught fire causing multiple injuries have voiced anger at the government and the building’s developer that nothing was done to repair it sooner.

The fire broke out before 9am on Friday on the eighth floor of the 19-storey apartment building in the New Providence Wharf development in Poplar, which is clad partly in combustible aluminium panels similar to those that fuelled the fire at Grenfell Tower.

The fire spread through properties over three storeys, trapping residents on smoke-logged balconies before 125 firefighters got the blaze under control. Smoke spread across at least six floors; video footage taken by residents showed. Two men were taken to hospital for treatment for smoke inhalation. A further 38 adults and four children were treated at the scene by crews from the London ambulance service. One firefighter was injured.

Michael, who lived opposite the flat that caught fire, said smoke filled his flat despite keeping the front door closed. He said the 999 operator ordered him and his wife to evacuate but they were beaten back twice by thick smoke in the hallway and retreated to their balcony where they could see debris falling from the buildings. When firefighters arrived to rescue them with breathing apparatus, their torches barely penetrated the smoke, he said. “The heat around my head was very high,” he said. “It was very, very hot.”

Since shortly after Grenfell, residents at the Tower Hamlets development have been urging the building’s developer, Ballymore, and the government to meet the costs of making their homes safe, estimated at almost £12m. Repair works were finally scheduled to start on Monday, nearly four years after the Grenfell Tower fire claimed 72 lives.

After the fire was extinguished, the government said it had warned Ballymore to move more quickly.
The buildings are among thousands in the UK affected by the post-Grenfell fire safety crisis. Almost a quarter of their facades are constructed with aluminium composite material panels, which were used on Grenfell. The areas around the windows and balconies appeared to be most involved in Friday’s fire.

Ballymore told residents the cost of fixing the complex had risen to over $20m. The government fund to fix buildings more than 18 metres’ high would cover $15m, while Ballymore, which also owns the freehold, has consistently said it will only contribute $915000, leaving leaseholders with a $5.4m bill.

“Work was supposed to start last year, then it was May and now it looks like June,” said Natalie Carter, a member of the New Providence Wharf leaseholders and resident’s association who owns one of the 550 apartments evacuated on Friday.
“The latest reason for delay was the application for government funding takes such time. We started that process between 18 months and two years ago. They are allowing people to live in buildings that are fire risks and today shows it tears through. “We are extremely lucky that no one died today. It’s frightening. We have been angry a long time and this is a horrific thing to happen, putting people’s lives at risk. People cannot understand we are still living with this. We are incensed that our lives are at risk because Ballymore says it can’t afford more than $915000.” of two others above and that the ACM cladding did not combust.

The London Fire Brigade sent 20 fire appliances to the block on Fairmont Avenue. Deputy Commissioner Richard Mills said: “The fire was on the eighth, ninth and tenth floors resulting in us carrying out 35 rescues, 22 using our fire escape hoods, and a further 18 people self-evacuated. This was a very dynamic and challenging incident and clearly there will be some people that will be looking at this and linking it to the tragic events of the Grenfell Tower fire.”

The fire developed across three floors in about half an hour, witnesses said, emitting thick black smoke and sending burning debris falling to the ground.
​​​​​​​
Giles Grover, a spokesperson for the End Our Cladding Scandal campaign group, which represents thousands of affected residents, said: “We are devastated to see this fire happen at a building that still has ACM cladding, and where the developer, Ballymore, has been playing hardball with residents in terms of how and if it will help … But our full ire is directed at the government. Ministers have chosen to deny the full scale of the building safety crisis.